My vacation resulted in many completed garments but the Cabarita  is by far my favorite. The blouse is designed by Cake Patterns and was a quick sew. I had intentions of sewing this a week ago but ended up starting it just a few hours before I needed to wear it to the ballpark with family for the holiday fireworks and still had plenty of time to eat and socialize with the family.

Highlights of this pattern include:

Overall I am super pleased with this pattern and will definitely make it again. The one thing I will change for next time is to make the upper arms with more ease. I made the pattern in 47 bust but need probably another 1-2 inches of ease in the upper arm to prevent pulling at the shoulders. Upper arm tightness is often a problem for me so I should have automatically made this alteration. Even so, this version is still definitely wearable due to the thin knit fabric but would be uncomfortable in anything thicker. Other than that, the Cabarita pattern is perfect and coordinates wonderfully with my red Hummingbird skirt!

The Sewing Cake Hummingbird Sewalong ends tonight so I finally got around to taking photos of my completed skirts. The Hummingbird was the first time I used a Sewing Cake pattern and I really liked it.  Steph’s patterns are not traditional but I really like her approach to garment sewing. The pattern is printed on thick waxy paper and intended to be traced instead of cut out. This method allows multiple sizes to be sewn over time without damaging the pattern.

I made one skirt in 7oz denim and another in red cotton twill. Both were part of the sewalong, so I cut and stitched them at the same time. The pattern allows for a high level of customization while tracing and cutting the pattern which was super helpful. Since there is a nearly 12 inch differential between my waist and hips, skirts usually require a ton of fitting which always bogs down my sewing mojo and leads to many half finished garments. This was not the case with the Hummingbird pattern. There is a “mid-construction” fit check to allow for some tweaking but I found that other than deeper waist darts in the back, there were no modifications required.

Things I need to work on from a sewing/experience perspective for the next time are:

I finally finished my Hummingbird peplum top two days late which is pretty good for me! This was the first time I had used a Cake pattern but it won’t be my last. I truly love the way Steph has developed the patterns…sheer genius!!!

The patterns are printed on a thick coated paper which makes them easy to fold and the printing is color coded and clear. I purchased some tracing paper from Amazon and used that instead of cutting my pattern. Due to the large range of sizes and quality of the pattern, I should be able to make multiple garments over an extended period of time by simply tracing. 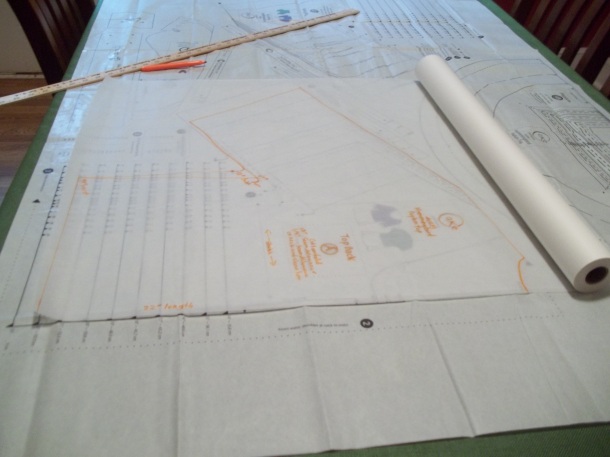 I used my  late 1960s/early 1970s Kenmore with no problems. This machine does not have dozens of fancy stitches or the specific lightning bolt stitch Steph recommends but after reading the manual, I did find the stretch stitch which is used when sewing knits and had no issues. I also finished the seams with my serger for a sturdier garment.

The only issue I encountered while sewing this top was due to inexperience and not the pattern. I initially sewed the peplum with the notches in the wrong spot which made the peplum hang awkwardly. After spending a good half hour trying to rip the seams, I finally took my rotary cutter and sliced right along the seam and started over. The second attempt looks much better!

The rest of the sewalong is devoted to the Hummingbird skirt which I am making in both red cotton twill and a 7oz denim. Hope to finish them both by Thursday so the garments will count as part of the Anna’s House total.

As if I didn’t already have a lot going on, I have joined StephC’s Hummingbird 30 Minutes a Day Sewalong. It starts today and will run for the next two weeks. The patterns were shipped in colored envelopes and the color indicates which “House” you are in. The houses are named after specific types of hummingbirds and I am in the pink Anna house. To make it more fun, there is a contest to see which house produces and photographs the most garments. The winning house gets a $10 gift certificate to spend at Cake Patterns. I plan to do my part to insure the Anna house wins!

The first week is devoted to the peplum top, green view. I plan to make one top using this knit I bought from Fabric.com:

The second week is devoted to the straight skirt, orange view. I plan to make two versions of this skirt using fabrics I bought at Joann:

This is my first foray into Cake Patterns but based on the reviews it won’t be my last. In fact I already have StephC’s new Cabarita RIFF pattern and I will be trying that out over my July 4th vacation. I also have the Tiramisu dress and Bonny top patterns on order so I fully expect my summer to be filled with sewing Cake Patterns!

My quest for a transformed life

A Sewing Blog for Everyone

Lisa Moorefield
The Amazing Adventures of Taracat
Tumbleweeds In The Wind

Tilly and the Buttons

Thank you for sewing with us...

she sews by the seashore...

because we missed it...

Did You Make That?

Leading UK sewing blog where we believe creativity is contagious

3 Hours Past the Edge of the World